You are here: Home / Nautilus Pond™ 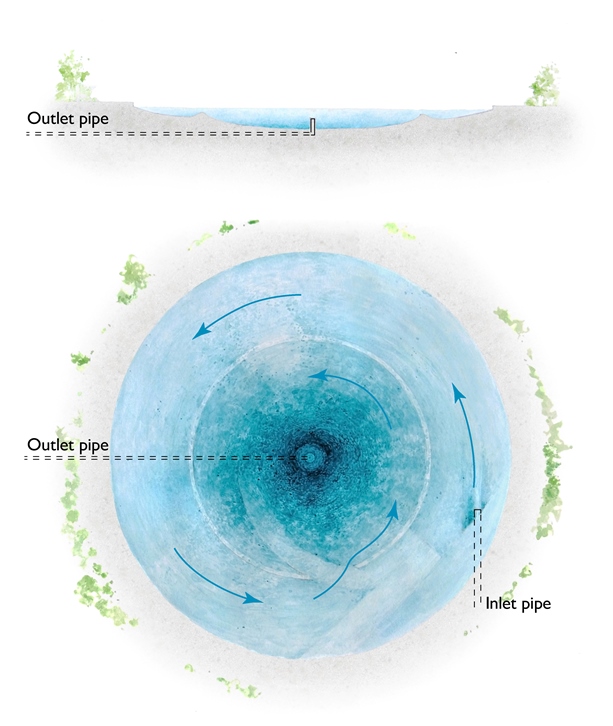 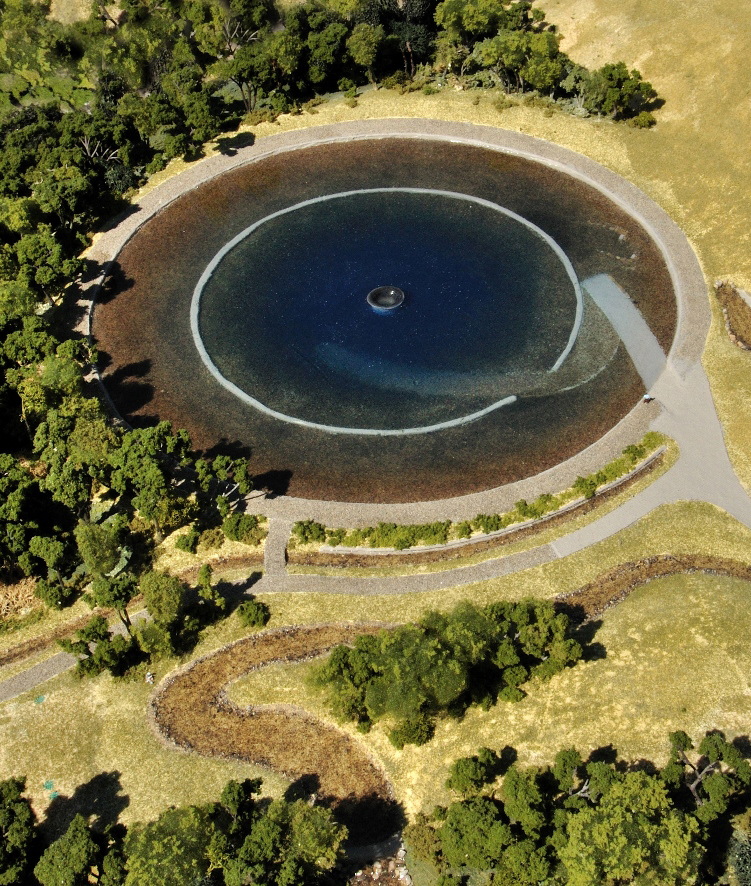 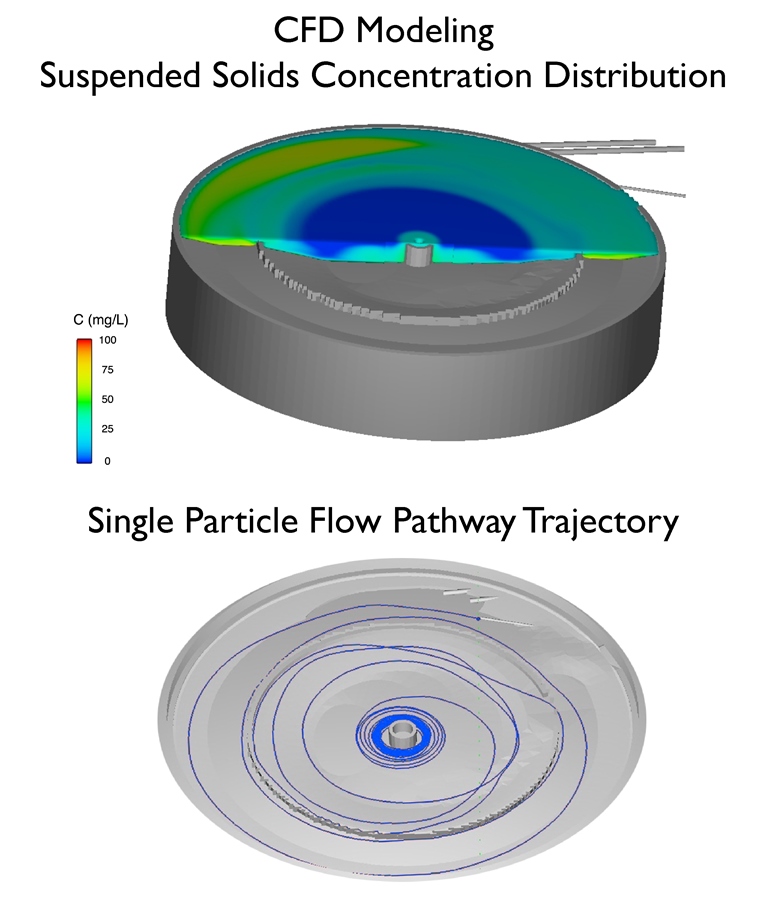 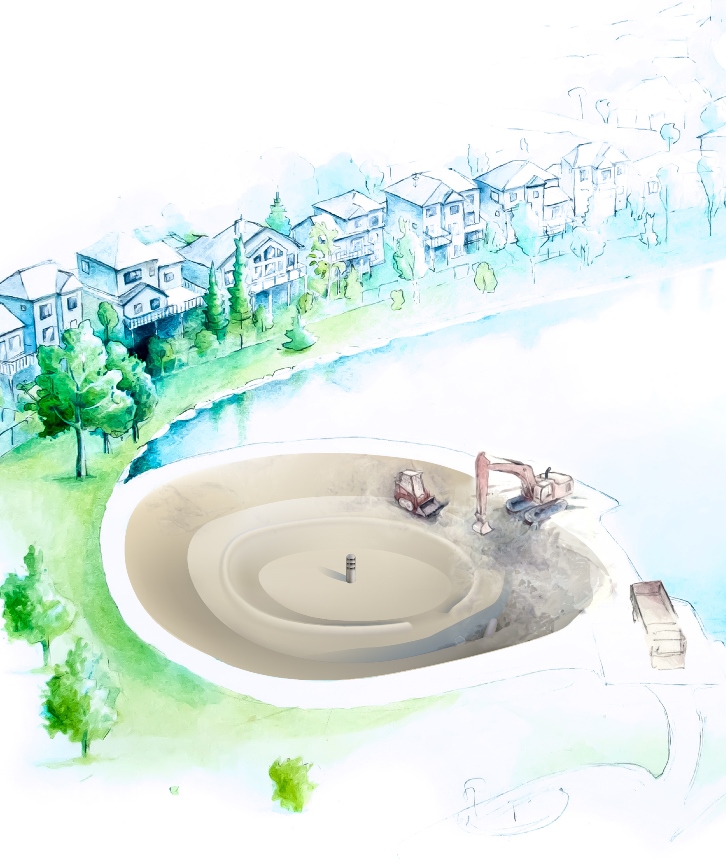 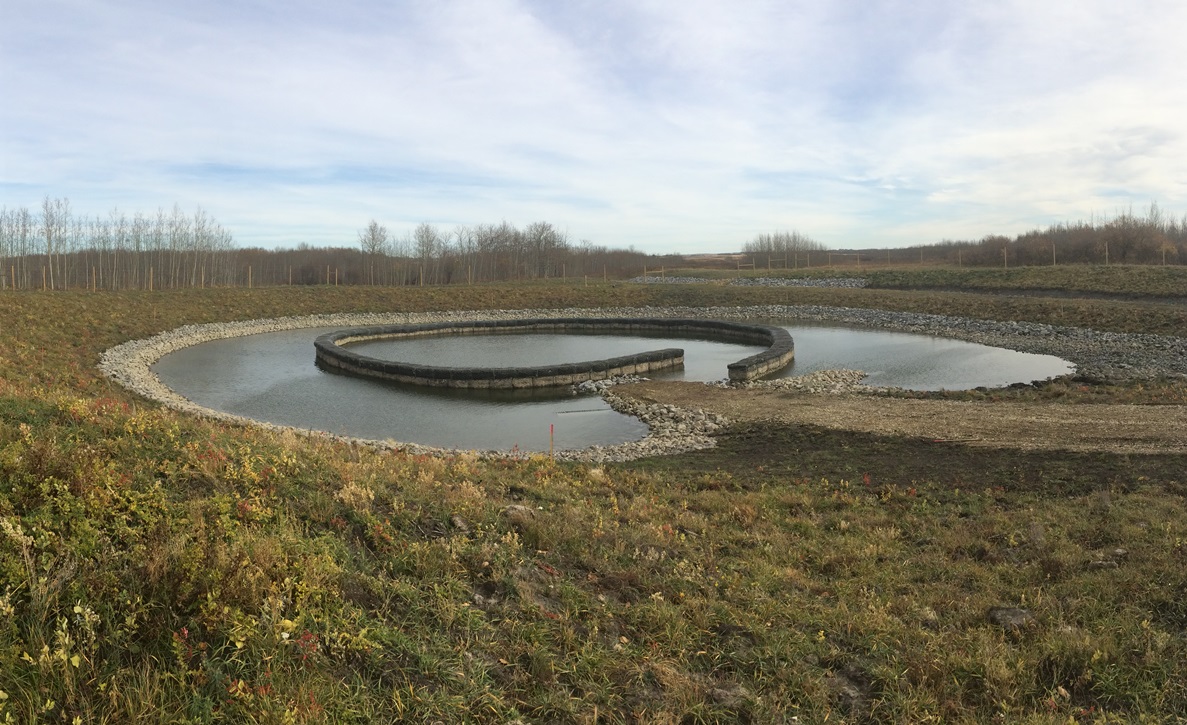 A Nautilus Pond™ (U.S. Patent No. 8,333,895; Canada Patent No. 2,704,715) is a high performance surface water treatment environment in both form and function.  The core “pond” portion of the environment is specifically designed to allow water that is resident in the pond prior to a stormwater inflow event to be displaced toward a central drain rather than mixing with the inflowing stormwater.  Resident water is then preferentially flushed in favour of retaining newly inflowing stormwater to a greater degree than is typically possible using designs consistent with current stormwater best management practices.  The result is a longer average stormwater retention time and better opportunities for achieving sediment and nutrient removal objectives.

The conceptual sketch illustrates how a representative forebay cell in a Nautilus Pond™ layout directs water to enter near and generally tangential to the pond perimeter.  Water generally follows an inward spiraling path and leaves the pond by a central drain.  An inner berm is shown that functionally separates an outer annular channel from the central portion of the pond.  This inner berm will be submerged under relatively small inflow events but ensures that the intended general spiral flow pattern will be maintained in the pond even under very large inflow events.  Since the inner berm is submerged under relatively low flow events, the illustrated Nautilus Pond™ forebay cell maintains almost the same active storage volume as a simple circular pond with a 100 m diameter.

General hydraulic control over the outflow is achieved within the control structure located outside the pond perimeter for easy access by  maintenance staff.  A single pipe can be used to draw water from the pond centre and deliver it to the control structure.  Water may be drawn from one or multiple elevations in the water column.

A Nautilus Pond™ is based on an elegantly simple and robust hydraulic form that generates very long flow paths when compared to traditional pond designs.  See below how the performance of a traditional pond design on the left compares with a Nautilus Pond™ design on the right for a simulated inflow event where blue dye enters each of the two models.  Unlike a traditional stormpond design, the Nautilus Pond™ preferentially discharges clean resident water instead of allowing new inflow water to short circuit to the outlet.  Note how traditional stormpond designs suffer from reverse flow over shallowly submerged berms which is a behaviour completely contrary to how pond designers and operators believe their ponds are behaving. 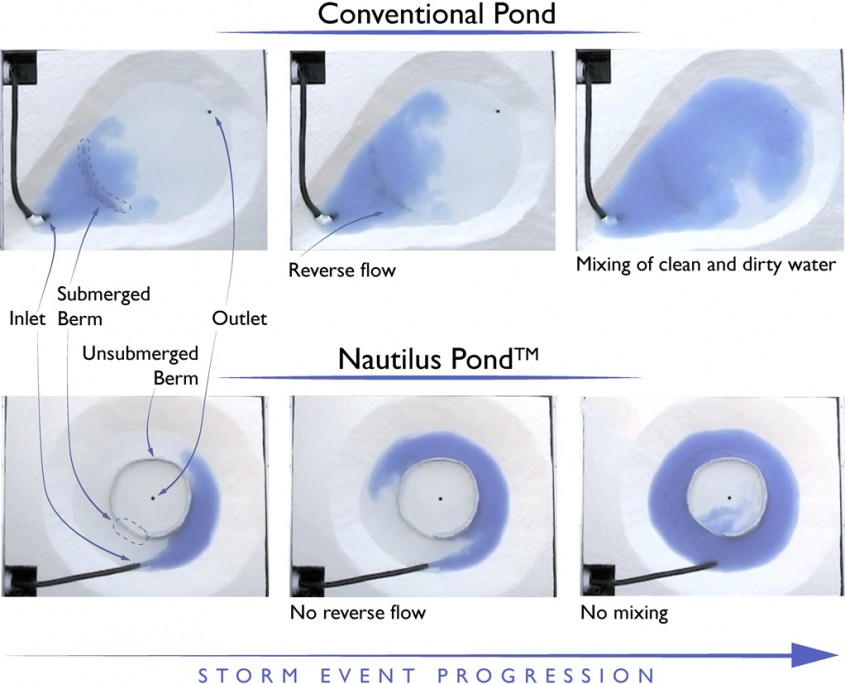 Many legacy stormwater ponds were originally designed primarily for peak flow shaving, that is, to control flooding risk or to reduce the need to increase conveyance capacity for downstream stormwater trunks.   Such legacy systems exhibit poor performance for water quality enhancement and usually suffer from a variety of acutely problematic side effects, including but not limited to costly sediment removal requirements, excessive algae and odours.  The system layouts illustrated below demonstrate how Nautilus Pond™ technology can be incorporated into any arbitrary pond footprint.  Municipalities can realize enormous water quality and maintenance improvements from ponds that are initially designed with Nautilus Pond™ technology or by retrofitting existing poorly performing ponds during a major sediment removal maintenance operation.

Nautilus Pond™ System Example A below illustrates how an existing pond design (left hand side) could include Nautilus Pond™ forebays (right hand side) on major inlets that pretreat influent water before discharging to the main water body. Nautilus Pond™ cells can be maintained independently from the rest of the pond thus significantly reducing the scope and scale of maintenance activities. For more information, please see the Harvest Hills Pond Case Study. 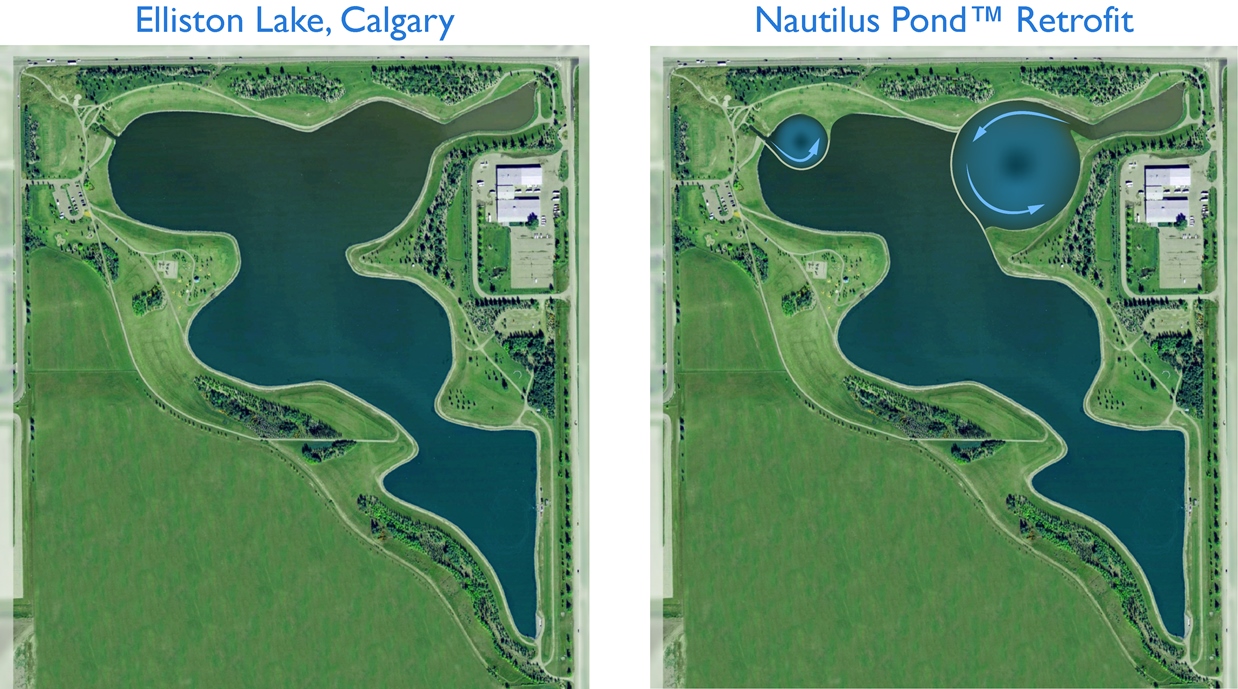